Excluding the last precipitations by rain and snow, the climate was reported to be quite dry for Turkey in this winter. A related news regarding dwindling drinking water supply stated the difficult situation faced by İstanbul. Granted, changes in the water supply might not be a 100 % direct result of changing climate. Nevertheless, it has its own impact, so I decided to take a look on what is happening in Turkey in terms of drought with available data.

Fortunate of me, there is the following website of NCAR which explains different indices used to monitor and understand drought instances. Very briefly, Standard Precipitation Index is a statistical method which takes precipitation time-series data and gives SPI values with 1,3,6,12,24, and 48 months period. For instance, 12 months mean considering a month's precipitation and preceeding 11 months precipitation at the same time to generate a SPI value. Obvious shortcoming of this index is the lack of consideration of increasing temperatures. Still, it is quite effective and operational. Turkey's State Meteorological Service published SPI values for many sub-provinces and overall Turkey from 1980 to 2020 in the following website using ground observation data of precipitation: 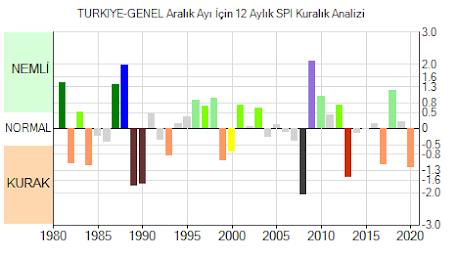 Figure 1. SPI time-series data of overall Turkey
The reported droughts for the country since 1980 occured in 1983-84, 1989-90, 1996, 2001, 2007-2008, 2013-2014 years. Except, 1996 and 2001, the index reasonably captures dry periods with quite negative values of SPI (smaller than -0.5). Another index is Standardized Precipitation and Evaporation Index( the database I used and cited has Open Database License, itself uses ground and satellite observations combined), which also captures the impact of increasing temperatures over drought. The following Figure 2 shows how well it captured the reported droughts in Turkey overall.

Figure 2. SPEI time series with 12-month period over Turkey overall, with red lines indicating actual droughts experienced
The first thing is, 1983-84 drought period does not seem to exist in this graph. According to the Palmer Drought Severity Index computed in another study, that drought was confined in northeast corner of Turkey in February 1983, where for that point alone, the interactive SPEI database, too, shows a dip in SPEI value. The 2001 SPEI value is almost -2 for the entire year, where a country-wide drought was observed. In short, SPEI looks better than SPI in capturing notable drought events in Turkey. Moreover, another interesting snapshot is the 1950-2020 SPEI time-series of Turkey in Figure 3.

Figure 3. SPEI time series of Turkey overall
According to this graph, after 1989 Turkey started to see dryer and dryer conditions more, hinting at overall change in the climate, and possibly impending longer dry periods.
Coming back to the İstanbul's water supply problems, we can try to compare SPEI values of İstanbul and water levels in dams (the available data starts from 2011) (Figure 4). 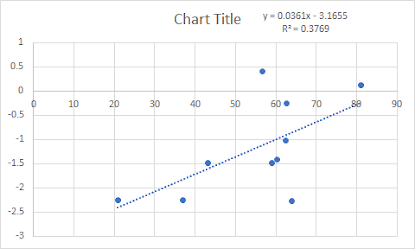 Figure 4. Scatter plot of percentage of water-filled volume in dams in İstanbul (x-axis) to SPEI (y-axis)
As can be seen from the R^2 value itself on the graph, the correlation is not much high. However, this can be misleading as the exact time of drought and exact time of water deficiency might not need to coincide, preceeding dry periods might result in later water deficit in supply as well. For this reason, I also compared SPEI time series of İstanbul to that of water levels in dams (data from İSKİ) in Figure 5. 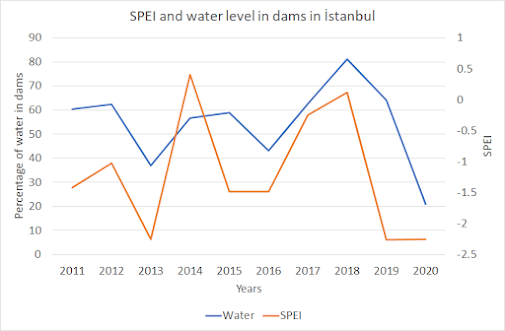